Material substitution within the SUP Directive

With this paper, Zero Waste Europe and the Reloop Platform would like to contribute to the findings from Eunomia Research and Consulting’s study What is Plastic (1), which we believe are crucial for establishing a Single-Use Plastics Directive that will help achieve a real circular economy for single-use plastics and reduce their negative impacts on the environment.

Background: The Plastics Crisis
Every day, a huge amount of plastic waste leaks into the environment, seas and oceans (5 to 13 million tonnes/year)2. Europe alone produces 25.8 million tonnes of plastic waste each year, only 30% of which is collected for recycling. Littering and leakage of plastic waste causes harm to the environment, generates economic costs to society, and can have significant impacts on human health through the food chain and air. The phenomenon is made worse by the growing consumption of ‘single-use’ plastics – those designed to be used only once, like food and drink packaging, and which are discarded after one short use, are rarely recycled, and are prone to being littered.

The Single-Use Plastics Directive (SUPD)
To address the root causes of the problem, the European Commission adopted the Single-Use Plastics Directive (hereinafter “SUPD”) on the reduction of the impact of certain plastic products on the environment, which entered into force on 2 July 2019. The SUPD tackles the 10 most commonly found single-use plastic items and fishing gear, which together account for approximately 70% of all marine litter found on European beaches (by count). The regulatory measures included vary by product category, with some being subject to outright bans while others will be regulated through measures such as EPR schemes, labelling requirements, design requirements, and separate collection targets. Together, the aim of these policy instruments is to mitigate plastic pollution by transforming the financial incentives for manufacturers to produce more sustainable packaging and increase the quality and quantity of plastics collected for recycling. 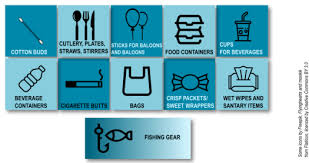 Proposed in May 2018 as part of the European Strategy for Plastics in a Circular Economy, consensus on the SUPD was reached in record-time, after just 8 months. The large majority (571 to 53) of MEPs were in favour, and even voted to improve the ambition of the Commission’s proposal by adding some strong new provisions around recycled-content and including new items on the list of products to be banned (e.g. oxo-degradable plastic and EPS).
The adoption of the SUPD represents an important step forward in the reduction of single-use plastics and in the transition towards a circular economy – including reuse systems and reusable materials – which is aligned with key EU priorities. Nevertheless, to overcome the plastic crisis and achieve the EU circular economy goals, a proper and ambitious implementation of the SUPD are crucial. This begins by getting the scope of the Directive right to avoid any loopholes.
Definition of Single-Use Plastics
The Directive’s focus on plastic products is understandable, both scientifically and politically. However, the reliance on the definition of plastic in determining which single-use products fall within the scope of regulation is potentially problematic, because single-use products of types that are in scope, but that are not ‘officially’ plastic, will be excluded from SUPD obligations. For example, the SUPD excludes “natural polymers that have not been chemically modified” from the definition of plastic.
In line with the intent of the Directive, exemptions for products made from some materials may be appropriate where these have substantially less impact on the environment than equivalents made from ‘plastic’. However, products made from unmodified natural polymers that cannot be shown to perform substantially differently in the environment would avoid the regulation and this could severely undermine the effectiveness of the Directive.
The question of which natural polymers are covered by the term ‘plastic’ and which may be exempt is therefore an important one.
In addition to the risk of exempting materials with similar or near similar environmental impacts from the Directive’s scope, the SUPD’s definition of plastic could incentivise manufacturers subject to EPR obligations to seek out material replacements which would exempt them from having to finance the cost of waste collection, treatment, litter clean up .
This would ultimately result in less money to local authorities, who will still be stuck with the responsibility of managing the single-use item even though it is technically not defined as ‘plastic’.
At the end of the day, if such material substitution happens in the conditions stated above the impact of the SUPD would be substantially reduced and could even backfire in environmental terms .

A focus on wet wipes
The study carried out by Eunomia, offers a close look at wet wipes as they offer a good example and analysis of alternative materials—non plastics—and how they measure up in terms of environmental impact. In the context of wet wipes, the debate has focused on two types of man-made cellulosic fibres: lyocell and viscose, both of which are capable of substitution for synthetic polymers.
The results of the study tell us that there are serious loopholes in the definition of ‘plastics’ that require attention in the
implementing Acts and Guidelines. Specifically, the results show that there is a real risk, currently being exploited by some players in the wet wipe market, that the Directive will be seriously undermined unless the Commission’s guidance gives Member States an unambiguous steer on this issue .

Recommendations
The SUPD’s definition of ‘plastic’, which is based on the concept of ‘unmodified natural polymers’, is imprecise, highly technical and subject to a lack of clear scientific consensus . Given the clear risk of exemptions running counter to the intent of the SUPD, it is essential that the Commission takes decisive actions to ensure that the effectiveness of the Directive is not undermined.
1. In order to avoid material substitution and obtain a real impact in the economy and the environment, as is the vision of the Circular Economy action plan, the Commission should implement an approach to products and waste that is not only material specific but also system oriented. As such it should:
a. Broaden the scope of single-use plastic to single-use applications in general.
b. Create a legislative framework for reuse operations that provides for an organised transition from single use applications towards durable and efficient reuse systems.
c. Utilise the recitals (e.g. Recital 2) of the SUP Directive, as guidance when interpreting legal text to ensure consistency between the Directive’s goals and implementation.

2.The Commission’s forthcoming guidance to Member States on SUPD implementation should clearly state that:
a. A restrictive and precautionary approach should be taken to the exemption of materials or products, applying a high burden of proof.
b. Through this, it should be ensured that the only natural polymers exempted by legislation are those which are proven to have characteristics in terms of persistence in the environment that are so substantially different to plastics as to allow them unregulated access to the market in the products in question.
c. Natural polymers are polymers in which polymerisation has taken place in nature and that materials where polymerisation takes place in an artificial or industrial setting are not natural polymers, even if polymerisation relies on naturally occurring microorganisms or enzymes.
d. Chemical modification is a binary process and either has or has not occurred. As such, there is no de minimis threshold or degree of modification that is to be considered too insignificant to consider.
e. Modification of chemical structure at any point in the production process is to be considered a chemical modification, even if such a modification has been reversed by the end of the production process.
f. When seeking to address the environmental problems related to the Directive such as littering, Member states should consider widening the scope of EPR schemes (in line with the ‘polluter pays’ provisions of Article 14 of the Waste Framework Directive3), to other single-use products, irrespective of material.

3.To strengthen the Directive, the Commission should incorporate the principles described in recommendation 2 into the Implementing Act to be adopted by 3rd January 2021 under Article 4 of the SUPD in respect of the calculation and verification of the consumption reduction of single-use plastic products, as this clarity of scope will be required in order to facilitate the clear and consistent measurement of the consumption of the relevant products.

4. The Commission should give urgent and serious consideration to and early amendment of the SUPD to address the risk of unintended loopholes that would still remain after the implementation of recommendations 2 and 3. Such amendment might take the form of either:
a. An amendment to the definition of plastic to exempt only those polymers that quality as ‘substances which occur in nature’ under REACH* whilst making clear that materials such as paper and cotton are not plastics;
b. Or preferably, to ensure that no unintended exemptions undermine the Directive, to move away altogether from a reliance on the definition of plastic and towards a set of clear single-use product definitions in respect of all product categories to be regulated under the Directive as stated in recommendation 1.

Conclusions
The main objective of the SUPD is to “promote a circular approach that prioritises sustainable non-toxic re-usable products and re-use systems over single-use products, aiming first and foremost at a reduction of waste generated (Recital 2)”.
The loopholes in the current definition of single-use plastic put the purpose of the legislation at risk by promoting material substitution instead of systemic change and this calls for rethinking the current approach .
Both the scale of the plastics crisis and the widespread support for an ambitious SUPD underline the importance of its proper implementation. The goal of the Commission is to deliver policy which accelerates the transition to a circular economy.
In the case of single-use products, prevention of waste should always be the primary goal, and measures should be put in place to incentivise behaviour that avoids consumption and for business, incentives that promote reuse .
Clear labeling of single-use and reusable packaging is also critical as it may contribute to the reduction in the amount of single-use plastic. Today, wet wipes are often advertised as being ‘easily flushable and biodegradable’. Such claims that could result in more littering should be prohibited.
The SUPD is a historic opportunity for the EU to show its global leadership in addressing one of the biggest challenges of our time.
Reloop Platform and Zero Waste Europe believe that the discussion around definitions must be contextualised in accordance with the SUPD’s main objective: to move away from single-use and towards a sustainable transition with reusable, durable and efficient systems. It would be tragic if littering or inappropriate disposal of items were allowed to continue, or if producers were entitled to evade their responsibility for such, by ‘innovating around’ a set of definitions.

1) What is plastic? A study exploring the potential for certain materials to be considered as exempt from the Single Use Plastics  Directive, with particular focus on man-made cellulosic fibres

* Editor’s note:  Interesting to read in this respect  Which Are Natural Polymers in the Sense of the Single-Use Plastic Ban? Open Letter to DG Environment by the Nova-institut. 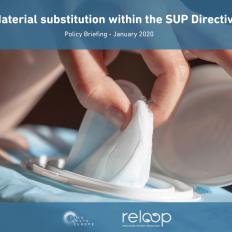